Rob called into our studio to enquire about a print project, and having at least one big comic art fan in the company (have you seen our display of 1980’s Marvel comics and original marvel and DC art), we instantly took a real liking to his particular style.

Volta: Who or what inspired you to do what you do?
Rob: I’ve always loved comic books and, from a young age, would copy them and draw my own. I began making films in my teens and a keen interest in story and drama developed which inspires my work to this day- not the least when storyboarding for narrative film and animation.

Volta: Were you self-taught or have you had training?
Rob: Post A-levels I took a fine art foundation course at Barnsley Art College. Aside from the exhaustive life drawing classes it felt, at the time, to be pointless. Years later I started to appreciate what we’d been learning, and to comprehend the value of chucking contrary emulsion at planes of uncertainty and such like.

Soon after that I got my first freelance illustration work with The Leadmill providing artwork for posters and flyers, T-Shirts, comics and other merchandise, which is where the learning curve really ramped up.

I subsequently worked in video games doing concept paintings and 3D animation, followed by a few years in the film animation industry.

Each job requires new methods and a fresh approach, so the learning process is ongoing.

Volta: How did your current style develop and how do you see it developing in the future?
Rob: Working on other people’s projects for so long has required constant adaptation to client’s needs and, for commercial work, I’ve used whatever style needed.

Recently I’ve been working at my new brand of Scream-Printed apparel, Daemon237, and have had the chance to explore my own art, focusing on drawing and composition with fast and energetic black and white rendering, influenced by horror and sci-fi comics of the 1940s and 50s.

I work a lot of conventions and trade shows, drawing Zombie Caricatures, which has necessitated giant leaps in my style. Creating pictures quickly, in front of a crowd, requires a confident and committed approach to linework. I’m trying to capture that speed and vitality in my regular studio based stuff. 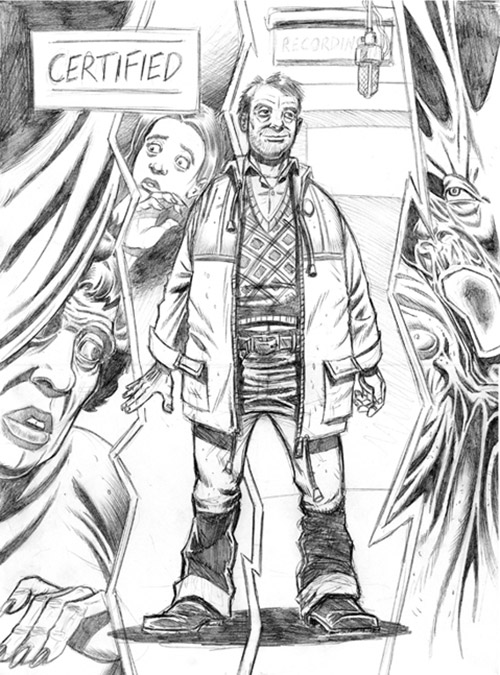 Volta: What influence has living in Sheffield had on your creativity and how you approach your work?
Rob: I find Sheffield’s lively creative scene inspiring. We’re surrounded with amazing imagery, music, films and everything in between. Being caught up in all of that makes me want to work harder, produce better work and, hopefully, to be an active part of all that’s going on.

Volta: What is your favorite media to work with?
Rob: I love using dip pens and brushes. There’s something about laying down a beady line of ink that’s very satisfying. As soon as nib hits paper there’s no turning back, no option to be tentative.

Commercial work is usually digital to allow for flexibility and alterations from feedback. I work on a Wacom tablet which allows me to draw very naturally and makes it quick and easy to change things later in the process.

Volta: What piece of your own work gives you the most satisfaction and why?
Rob: I drew a set of five prints for Sheffield’s Iron Sphincter – The Zombie Band, which led to some strong friendships and opened up radical opportunities for my art. I’ll always have a soft spot for those prints.

Volta: Do other areas of creativity have any influence on your work?
Rob: I’m influenced a lot by music, novels, film, theatre…whatever has an effect. I listen to music or Radio 4 whilst working, it all contributes.

Currently I’m directing and animating a video for Iron Sphincter, and it’s been brilliant to work closely with musicians, creating visuals to complement their sound.

Volta: If you could lay claim to one piece of creative work in any area what would it be and why?
Rob: This will change constantly but, right now, it’d be the film King Kong Escapes, a Japanese/American production from 1967.

Kong battles a 60 foot Mechani-Kong Of Iron, as well as wrestling dinosaurs and punching a sea monster, all the while pursued by the evil Dr Who. It’s probably the best thing that’s ever been made.

Volta: What is your favourite thing about Sheffield?
Rob: I love the hills and the green space. Most days, work allowing, I’ll take a walk in Ecclesall or Gillfield woods, or Endcliffe park- home to the Sheffield institution that is Pullin’s Amusements!

On weekends I often drive around seeking long lost local theatres and cinema buildings, or soaking up the atmosphere of the varied old estates. Sheffield’s psychogeography is rich and runs deep.

Volta: What advice would you give an aspiring fellow artist who was wanting to break through to the next level?
Rob: Keep doing what you do, whenever you can. Work wholeheartedly and see things through to completion then, taking what you’ve learned, make your next piece better. 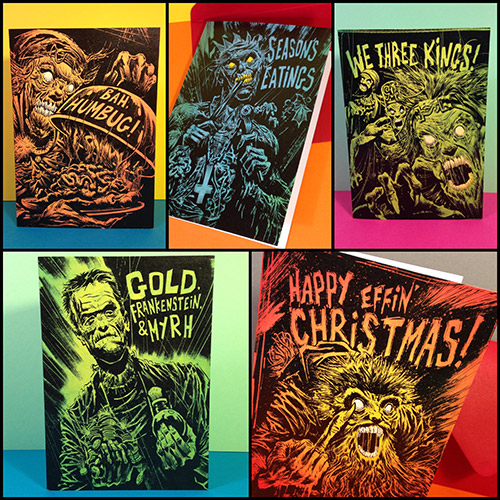 Want to find out a little more about Rob and FatRobot?

Have you visited our friends @treehousesheff we’

Signage design and supply for our friends at Apple

Here’s the wonderful July page from our Quirky S

Here’s this months page from the Quirky Sheffiel

It’s our birthday - we are 30 years young today

Any cookies that may not be particularly necessary for the website to function and is used specifically to collect user personal data via analytics, ads, other embedded contents are termed as non-necessary cookies. It is mandatory to procure user consent prior to running these cookies on your website.